As the United States attempts to climb out of the economic recession, Americans are wondering where are the best places to live in this changed market? For some, this may be defined as the state with lowest crime rate, best housing, most accredited schools. But for professionals, the question they want an answer to is in what states are businesses booming? Here are the states where business is moving to and assisting with economic growth. 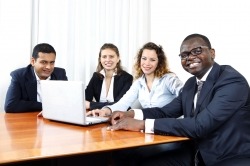 “Old Dominion” finally topped the Forbes’ list of Best States for Business for the first time. It has been steadily hanging over 2nd and 3rd place but has finally reached the top. The reason for Virginia’s number one position is attributed to their governmental policies aimed at friendly business relations and offering large incentives to businesses in within the state. About 30% of Virginian business is tied in with the federal government as well as a large interest in the state from technology companies meaning more jobs and a lower unemployment rate compared to the national average at 5.7%.

North Dakota’s economy is “booming” according to economic analysts. North Dakota has one of the lowest state populations but is also topping the country in job growth, income growth and employment. A large part of this boom is contributed to the oil shale fields within the state that have been bringing more business to the otherwise quiet state.

Utah has been increasingly recognized for their pro-business climate and it seems to be paying off as they come in third best state for businesses in the country. They also have some of the lowest energy costs in the country at 29% below the national average. Lower utility bills can be beneficial for the state’s quality of life statistics.

MUST READ  Business Trips to London with all hotel comfort

There is a huge corporate presence in Minnesota with some of the most recognizable companies stationed such as Target and General Mills. In addition, Minnesota has the highest percentage of high school graduates contributing to their high quality of life statistics.

Colorado is a relatively progressive state and continues to grow economically. Colorado is expected to have one of the fastest growing economies for both household income and job growth. This projection is supported by the state’s recent legalization of medicinal and recreational marijuana. By doing so they have opened up a number of businesses and creating jobs for the state as well as by increasing public interest in the state. Colorado also has some of the highest education statistics for both high school and college attendance.

Being home to the third richest man in the world, Warren Buffet calls Nebraska home as well as a variety of businesses. Nebraska has the 3rd lowest unemployment rate in the country along with a higher than average high school graduation rate. This factors combine to create the high median household income in the state.

Everything is bigger in Texas including the wheelings and dealings of the business world. Texas has shown 3% job growth in the past few years as well as being ranked number one in economic climate, meaning that the economy in the state has the highest projections. Likely due to the large corporate presence within the state with 116 of the 1000 largest companies based out of Texas. Some of the largest are also some of the richest, particularly Exxon-Mobil and AT&T. This success does not seem to translate to those of lower socioeconomic status as the state has one of the lowest education and quality of life statistics for the country.

Along with the lovely state of Colorado, Washington legalized the use of recreational marijuana and created a legal avenue of developing jobs and decreasing unemployment by outfitting this recently opened market. Because of the numerous corporate enterprises began out of this state, venture capitalists are always looking toward Washington for the newest in business innovation.

Excluding Texas, southern states have always had difficulty appearing high on business or education lists, but the peachtree state is breaking through that assumption. The state has huge corporations stationed there such as Coca-Cola and Home Depot but it still has one of the highest poverty and foreclosure rates.

These results are based on a multitude of factors such as unemployment rates, job growth, labor costs and median income.

How to Increase Your Business Quickly with Credit Card Merchant Processing

Dynamics of Office Moving out checklist

Start up company Tips for Choosing The Ideal Office

LED Home Lighting – light up your house in an environmental friendly way!

5 Simple Tips for saving money On Your Home Renovation