Top 5 Reasons You Should Visit San Francisco This Summer

Why Visit San Francisco This Summer

Anyone looking to book a summer vacation should put San Francisco squarely at the top of their must-visit list. The Bay Area city boasts all of the excitement, from a lively arts scene to rich historical significance, that visitors have come to expect from larger metropolises, but without any of the less pleasant attributes that generally go hand-in-hand with more well-trodden destinations. Add in the refreshing, perennially spring-like Bay Area weather, a gorgeous waterfront surrounding, and activities that will appeal to visitors of all ages, and you have a vacation destination that’s sure to become a fast favorite. Check out our top reasons for visiting San Francisco this summer:

Tons of opportunities to get outdoors: As the long summer days set in, who doesn’t want to spend more time outside? Luckily, in San Francisco, there’s an abundance of outdoor activities to suit everyone’s taste. Thanks to San Francisco’s relatively mild weather, you won’t find yourself racing for the nearest air-conditioned space, even on some of the warmer summer days — the temperature generally remains in the high 60s throughout the summer, and only dips into the 50s at night. For fitness fanatics, San Francisco provides a wealth of activities that will keep you on the move, with plenty of parks, like Golden Gate Park and The Presidio, that are perfect for a morning jog, and numerous golf courses located throughout the city. Even avid hikers will find themselves challenged by San Francisco’s terrain, from Lands End’s 3.5 mile hike, which offers gorgeous views of the Golden Gate Bridge, to the sweeping city views you can enjoy from the top of Mount Davidson.

Must Read
10 Common Fallacies To Kill The Bed Bugs

Bed bugs, a common problem that people face but fail to recognize timely, so don’t pay attention to the treatment. Read more

Guidelines to help you in becoming reachable in social networking sites

Successfully Connect Online with these Easy Tips Social media is the most accessible and easy way to connect with people. Read more

Build your Career by managing your social media profile

Facebook, Twitter and Linkedin are arguably the biggest social networking sites at present. They connect people all around the world Read more

Things to Remember when Promoting on Social Networking Sites

We are all aware about Business and corporate laws. These rules exist to maintain the responsibility of each individual towards Read more 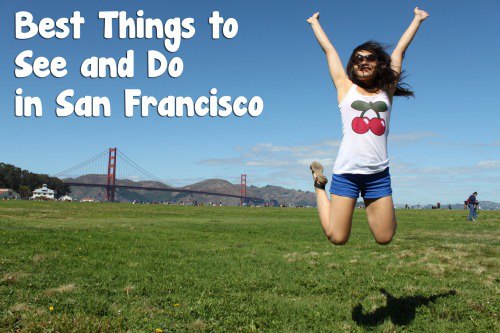 Museums you won’t find anywhere else: San Francisco’s arts culture rivals that of major cities like New York and Los Angeles, but the city arguably has an even greater variety of museums to enjoy. Appreciators of fine art can get their fix at the San Francisco Museum of Modern Art, the Fine Arts Museum, the de Young Museum, and the Asian Art Museum. History buffs will love taking a trip back in time with visits to the San Francisco Railway Museum, the Cable Car Museum, the MuséeMécanique, the Maritime Museum, and the Contemporary Jewish Museum, while those fascinated by nature will have an eye-opening experience at the California Academy of Sciences.

Some of the best food in the world: San Francisco’s culinary scene is unlike that of any other city. A true cultural melting pot, diners can enjoy foods from around the globe without ever leaving the city limits. Start your day at Fisherman’s Wharf, where you can enjoy some of the freshest seafood the city has to offer. When you’re done taking in the sights, sounds, and flavors of the Wharf, make your way down to Chinatown, home to some of the most authentic Cantonese, Hunan, Sichuan, and Jiangsu cuisine you’ll find off the Asian continent. Of course, no trip to San Francisco would be complete without a tour of the celebrity chef scene, so book yourself a table at Kim Alter’sNightbird or Ravi Kapur’s Hawaiian-inspired Liholiho Yacht Club.

Kid-friendly activities everywhere you look: Kid-friendliness tops many parents’ wish lists when it comes time to select a vacation destination, and you don’t get much more family-oriented than San Francisco. Throughout the city, there are numerous fun, kid-friendly activities to enjoy that don’t include a single cartoon character or animatronic. Museums like the Children’s Creativity Museum will pique your children’s curiosity by letting them design their own video games, animate short films, record music, and try their hand at robotics. The Exploratorium, Aquarium of the Bay, and the San Francisco Zoo will also keep little ones occupied for hours while providing plenty to explore for parents.

Fascinating history all around the city: San Francisco’s landscape is littered with landmarks that have shaped both the history of the Bay Area and America as a whole. Early reminders of San Francisco’s history are still standing throughout the city, like Fort Point, a Civil War-era military fortress created as the first line of defense against invasion by sea. The landmarked site can still be visited today at its original location under Golden Gate Bridge, where it has remained largely unchanged since it was first built in the 1800s. Just off San Francisco’s coast lies one of San Francisco’s most famous tourist destinations, Alcatraz Island, which has been preserved as a historic site since the prison for which the island was known closed its doors in 1963. Sites like Mission Dolores, which holds the distinction of being San Francisco’s oldest building, The Palace of Fine Arts Theater, the San Francisco Ferry Clocktower, and Angel Island State Park all deliver a wealth of entertainment and fascinating history, as well.

Make your next vacation a fun, fascinating, and enriching thrill ride with a trip to San Francisco. From fine art to picturesque hikes, there’s something for everyone in the beautiful Bay Area.

How To Find Your Target Audience

7 Apps For Parents Trying to Juggle Everything