Top E-Commerce Platforms of This year

India has a retail sector of USD 490 billion, of which the Indian online retail market is valued at over USD 3.5 billion. The e-commerce industry in India, pegged at a consumer base of 35 million in this year, is reportedly estimated to grow to 100 million consumers and a value of $ 15 billion by this year. Obvious cause for this exponential growth? The convenience of purchasing with a few taps of the finger. But besides this, the other most pressing advocate of e-tail and the prime converter resulting in the present day e-buy-boom, is undoubtedly the lure of Coupons. 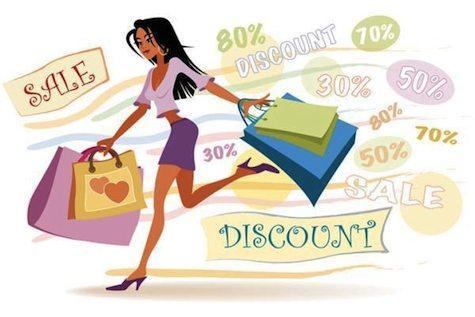 The Advent, Growth and Magic of Coupons

?      Having forayed into the Indian market in 2009-10, Coupon leaders such as Couponzguru, Groupon, Flipit, Cuponation etc. are now household names

?      From 1 in every 10 internet users to have accessed coupons sites in this year, the number had grown to 5 out of 6 in this year.

?      As per a survey, 95% buyers admitted to having searched for deals online, and 74% viewed the coupons available at couponing portals.

?      AnkurWarikoo, CEO Groupon India told IBEF here that the coupon business is 13.5 per cent of the total e-commerce audience in India, growing at the rate of 62.9 per cent with 7.6 million unique users a month.

?      ET recently reported that couponing and deal-buying sites have seen a revenue rise of almost 500%, attributable to big e-commerce players such as Amazon India, Flipkart and Snapdeal.

?      RachnaNath, leader of retail and consumer at PwC said that “the coupons on e-commerce site are usually directed at customer acquisition and ensure that the customer revisits the site the next time to redeem the coupons.”

?      Essentially, it is a win-win situation. There’s no looking back for the couponing and cashback sites due to increased internet penetration and e-commerce traffic. For the Indian e-commerce players, the heavy discounts and deals offered by the Coupons and Cashback industry are a major crowd puller, leading to higher customer conversion and acquisition.

?      Following is an infographic depicting the source of traffic, including referrals, at various e-commerce giants’ portals in India: 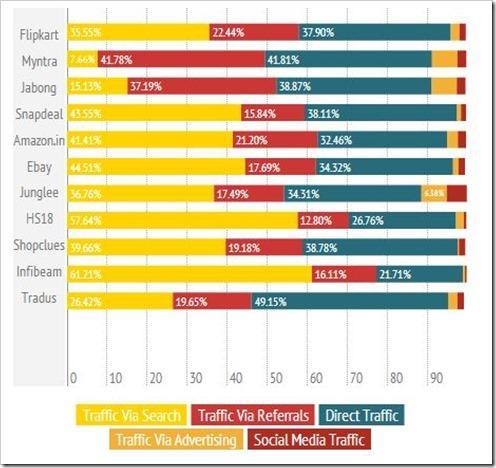 It is to be mentioned that Snapdeal initially started out as an online deals aggregator back in 2010, it rose to a user base of over 15 million as a couponing site and converted itself into one of India’s leading e-commerce marketplaces.

?      Indian shoppers are synonymous with bargaining and eliciting the best prices commodities and services the world over. It is little wonder that e-tailers have understood the pulse of the nation and are offering coupons and deals’ portals commissions ranging from 5% to 50%!

?      As per Cuponation’s survey reported by DNA India , approximately 85% Indians use coupons to make use of discounts, as compared to 78 % globally.

MUST READ  Challenges you’ll face on every Proofreading services project

?      The saturation of online Indian retail space is nudging coupons and deals sites to be more creative. Increase in competition means one thing –more savings for the Indian shopper!

Even with the rising number of online shoppers, the pasture is still not green for the online retailers. While most are still far away from being profitable, the bigger firms are still riding on VC funding and selling products at highly discounted rates. Several of the major consumer brands like Samsung, Sony, LG and so on have spoken against this practice and have even threatened to take their products off the shelves of the marketplaces.

Since these discounts have primarily been to acquire new customers, when these online retailers will hit a sweet spot or feel too much pressure from their respective investors, marking down prices drastically will have to stop. This will be the time when the couponing and cashback players will come into play, to be a bridge between happy retailers and happy consumers who would have gotten too used to heavy discounts.

Vikash Khetan, CEO, CouponzGuru, says “Definitely coupons have played a vital role in e-commerce boom and it’s here to stay. Intelligent use of couponing has helped many new e-com stores to create a buzz and acquire new customers. Frequent coupon releases by brands have also helped them to create repeat buyers.”

“Few brands like Foodpanda & Myntra have an excellent coupon strategy – every now and then they keep coming up with special coupons for new buyers / inactive buyers and few more segmented buyers; this helps them in retaining as well as acquiring new customers. Another example is Zovi – we see an increase of at least 50% in conversions whenever Zovi releases a new coupon and we keep getting emails from our users seeking new Zovi coupons (so indirectly coupons helps brands by getting a top of mind attention by buyers).” He added

?      Coupons must be placed at an eye-grabbing space on the website. It must be first thing potential consumers see.

?      Tying up with multiple coupon publishers is a good strategy to maximise visibility.

?      Limited time coupons will instigate a sense of urgency in shoppers, ensuring that they don’t put off purchasing to ‘later’.

?      An open return policy on coupons will alleviate consumer concerns about purchasing without physically checking the article. Such a policy would increase consumer faith, suggesting that the e-tailer believes in the quality of its product.

It is no rocket science that stores with the best offers are the ones which are most popular. Presently, Indian shoppers have begun to visit brick and mortar establishments, try products, return home and order the same articles on e-tailing portals due to the coupons and discounts available online! The growth of enterprises such as Reliance Fresh and Big Bazaar depended on the deals and the large umbrella of products they offered. For e-commerce players, it is a no-holds barred playfield as platforms such as Amazon, Flipkart, Snapdeal etc. cater to consumers of all ages and types, due to the enormous variety of products they sell. And since their consumer base is also pan-India (and therefore, quite literally a human sea), the large numbers allow them to give out unprecedented discounts and deals, to capture as much audience as they can.

Vikash Khetan is an engineer turned entrepreneur and is the founder of CouponzGuru.com, which is a leading coupons and deals website in India. He has worked as a Business Analyst in IT for 5 years, before taking up his passion for Internet Marketing full time.

Launched in this year, CouponzGuru is one of the first coupon aggregating sites in India. It has discount coupons for over 350 online stores and strives to have an updated collection of latest & working coupons, which are manually verified before being uploaded, to ensure all visitors get what they want.

Importance of Custom Pocket Folders for Branding: A Complete Guide

Factors That Contribute To The Overall Cost Of Garage Door Repair