Okay Cavemen, either you ve moved into a larger home or the kids have sprung their wings and have left the nest?all of which leaves you with either the basement, the garage, or another large space in your home that your wife has decreed to become; ?the Man Cave.?
So where does one begin? How about planning what you want to do with your new-found space?

Most likely you?ve been relegated to the basement or garage. But that?s cool. You?ll be down there with your buddies watching sports, so it is imperative that you make a lot of room?A LOT. Face it; we are guys and when we watch sports we tend to get a bit animated when things happen. We begin waving our arms, throwing stuff at the television and on occasion even some hazing incidents have broken out much to the dismay of our wives and girlfriends. All of that says; ?GIVE US ROOM.?
Knock down walls, expand into the outdoors if you can but whatever you do, make sure you create enough room to accommodate some rough-housing. 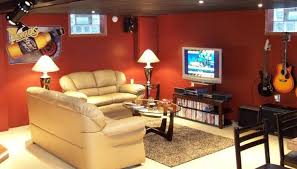 Let?s face it; we?re guys and we usually break stuff. So the stuff you have in your Man Cave stuff should either come with a hefty warranty, or be something that is built tough enough for one of the Decepticons to use as a squeak toy. Bottom line; it needs to hold up.
Don?t be afraid of having an industrial or rugged look to your Man Cave. Incorporate vintage old lockers for storage, rough-hewn wood tables or even using old metal work benches?the idea is to make it male. That?s what it is all about, gentlemen. There will be no frou-frou and matching impressionistic art down there, so don?t be afraid to embrace your inner cave man and go with what you like, and what holds up.

Next up on the ?must have? list is the entertainment center. Again, electronics to us are like water to a fish and we want the latest, the greatest and the best gadgets that mankind has developed since we slithered out of the primordial ooze billions of centuries ago. Why we love ALL electronics so much, we don?t care if we don?t know what the deuce they do?we still want ?em.
So think about a place to centralize these toys and what you need to do in order to accommodate all of your Xbox1, PlayStation 4, Wii consoles, and those DVR devices, Apple TV, Roku, Blue Ray players, etc. in one place. This is critical because as technology changes, you may need to move certain components into the trash heap.
The easy solution is shelving. Grab it and go. By having one shelving unit that holds ALL of your electronic devices it eliminates having to endlessly chase wires and outlets as technology changes.
How about an alcove to hold those? Find your buddy that either does drywall, or knows someone who owes him a favor, and then look for ways to make your wall adapt to the various devices mentioned above. By creating alcoves and nooks in the wall it saves space, also allowing you to have easy access to each of the electronic items/consoles you are blessed to own.
If you can?t do that, you still want an electronics hub center (see also: Master Control Lair)
Alcoves will save space, and allow for more organization in these nooks?right near your GIANT LED MONITOR!

Yes! No Man Cave hopes to be called such with anything less than a 48? screen. Go big here, gentlemen. Start saving the change, skipping Wendys for lunch and picking up coins you see on the sidewalk and save for something huge that will bolt onto your wall and allow the best visual experience.
Man Caves everywhere seem to have grasped the concept that bigger is better. And the best part is, we?re coming up on Black Friday and Christmas so remember to avoid being naughty when being nice may just get you a cool new monitor for the Man Cave.

MUST READ  The Advantages of Diesel for Your Business

TEAM THEME
Now of course guys have the whole sports thing going on. It consumes our daily lives. Half our brains are devoted to irrelevant sports statistics and trivia. Matter of fact, why do you think that no major professional sports season ever occurs consecutively with another? It is all part of our genius. So if sports are your deal?run with it.
We?ve seen Man Caves with basketball style floors, complete with their favorite team?s logo. We?ve seen Man Caves with floors painted to look like hockey ice rinks, and yes, we?ve even seen Man Caves with an overall sports theme, ranging from golf to badminton. (Okay, we?re kidding about the badminton?cricket maybe, but never badminton.) Matter of fact, one guy we know bought several official sports lockers and team lockers to accommodate his golf gear in his golf-themed Man Cave.
Having an overall sports theme can not only show your team pride, but it can also give you a way to decorate because face it; this is not our area of expertise?

GAME BOY
Then there are the games! If you?re a dude, you?re probably pretty competitive?it?s just our nature. We go out, chase something down, kill it and bring it home and we do it before the next guy can. It?s been that way since the dawn of time. There are no points for coming in second place?only coming back to the cave hungry, or stuck on the bottom of some Brontosaurus? foot.
So we compete. It?s hard wired into us. Make sure that your Man Cave not only has games, but the things in place to play them. Poker tables, basketball hoops, foosball tables, and yes, where are you going to store all the components of these?
Here is a cool idea. How about a gym or school locker for the Man Cave? Not only do they give you the ability to match your Man Cave with your preferred team?s color, but you now have a place to store your stuff so the girlfriend or wife doesn?t take away your Fortress of Solitude when she sees the mess.
Now of course there are a myriad of other things you can add to your Man Cave depending on whatever vice you wish to enjoy down in your subterranean or garage lair. Some dudes put humidors in for their cigars, perhaps a DJ booth, huge disaster proof cases holding beloved Star Wars memorabilia, while others spend lavishly on a nice bar that is fully stocked of course until your rowdy buddies come by. So again, see how a locker with a combination lock can come into play–? You get it.
The limits to what you want to do with your Man Cave are as far reaching as what you want to do with it. There are no rules?basically it?s Thunderdome in decorating!
If you want it, you like it and you can truly appreciate it; then do it! And make your Man Cave a place that you feel comfortable where you can enjoy all the things that make men?men.

MUST READ  5 Benefits of Gardening in shades

Chance works for www.buymetalshelving.com, dealing with using industrial shelving in the home. He has seen put into play various types of shelving units, and has noted firsthand how they have improved the home.

Leave feedback about this Cancel Reply

How to choose the perfect leather sofa for your home

How to Create a Beautiful and Relaxing Bedroom

Do Not Despair When Your White Goods Have Had Enough

Quote of the Day

The monk who delights in diligence and fears negligence is incapable of losing wholesome qualities. He is close to Nibbāna.